Whitetail Doe Life During the Winter 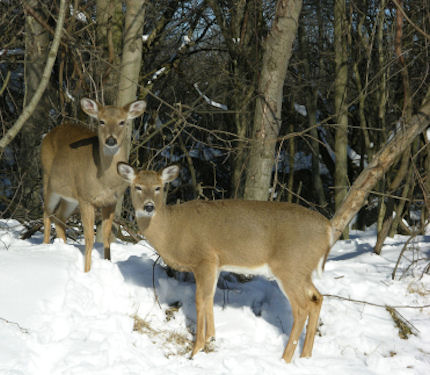 Whitetail deer usually find themselves flourishing during most of the seasons, especially in the spring, summer, and fall, when there is usually plenty of food to be found. However, it is during those winter months that things get a whole lot harder on them, if you take a look at whitetail deer information.

Of course this is an especially hard time for the doe. Let's take a closer and in detail look at the doe and how she does during the difficult months of winter.

During the winter months, things can get quite tough for the deer whitetail doe, especially if she lives in the more Northern areas of the United States or up in Canada. The cold and snow can be harsh, and in some cases, the doe may migrate further in search of food.

Of course other than just dealing with a harsh winter, the doe often has a hard time because food is scarce during the winter. Sometimes she may be able to find some green beneath the snow; however, she often has to eat brush, twigs, and even bark from trees to survive the winter.

There are actually many occurrences of does dying during the winter from malnutrition. This is when all the preparation from the summer and fall come in handy.

The doe's metabolism will slow down during the winter months, so she won't need quite as much to keep her body going. In some cases a doe may go for days without finding food as well, making her rely totally on her fat reserves, which cannot last forever.

While her metabolism may slow down, you still have to remember that she is probably pregnant during these winter months, which means she has a baby that is depending on her for nutrition as well.

This can make it even harder on a whitetail doe during the winter. Being pregnant and worrying about food all the time, not to mention the cold and snow can definitely make it a hard season for the doe.

Thankfully for the doe, she develops a very thick, gray, coat during the winter which is designed to help keep her warm. The gray color actually helps by attracting and absorbing the heat that comes from the sun. The coat is also insulating as well, helping to keep her warm.

The Hair on the Whitetail is hollow which makes for great insulation. In some cases you'll find that female whitetails often run together in the winter as well, which can help them all to keep warmer by staying together.

Of course if the doe can make it through the winter, spring will come fairly quickly, and food will be back again. So, while the winter can be so difficult for the whitetail doe, spring is coming and she'll soon get a break.

» Go to Whitetail Doe Life in the Spring

» Go to Whitetail Doe Life in the Summer

» Go to Whitetail Doe Life in the Fall 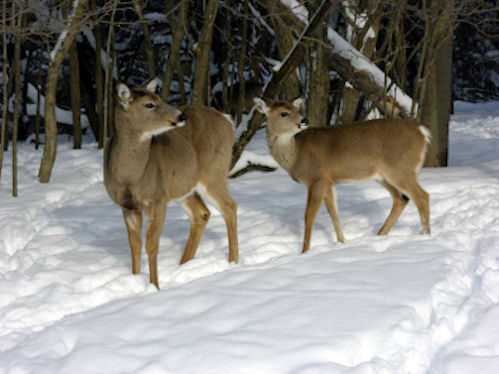